In April, we enjoyed an interesting and information evening with David Selves who is a great speaker and  thrilled The Network with the story of “UN Shield – the Elimination of War between Sovereign States”, it has long been spoken about and it is high time to implement it in view of the current situation in Ukraine!"
Check about the UN Shield on:
https://www.selvesgroup.co.uk/un-shield.html
Posted by JFDE at 11:30 No comments:

The Network is hosting a social & business networking event at the Civil Service Club.

David Selves,  a highly experienced and energetic businessman with over 50 years experience in the SME world. He has the Freedom of City of London, is a Freeman of the Company of Entrepreneurs, a former National Board Member and Regional Chairman of the Small Business Bureau (set up by David Trippier when he was Margaret Thatcher’s Minister for Small Businesses) and a broadcaster, speaker, moderator, and chairman with vast local and national political experience. Today his business life is morphing to  Non Executive Director roles including companies in flood prevention and wellbeing technologies and the arranging of seed and risk capital.

Despite a full and busy life, he has always found time to involve himself with charities and good causes and has raised just short of £1m for them on his gavel as a charity auctioneer. He also spent fifteen years of his life working on “UN Shield – the Elimination of War between Sovereign States” which was conceived by his good friend Paul Stonor, who died in 2004. David continued to promote the concept until the late noughties which had support from world notables, but not those in power. Some of the significant comments, mainly from the late nineteen nineties, were:

Jim Callaghan said, “When the Charter of the United Nations was agreed, those who designed it looked forward to such a possibility, but any progress was pushed into the background by the Cold War.”

Lord Ramsbottom said, “As ever …. the subject of a “quick response unit” came up. Such a body was intended in the UN Charter, but has never been implemented.”

Jean Pictet, the Red Cross lawyer who drew up the humanitarian military code, interviewed by Peter Capella in the Guardian, said, “I am a great-grandfather of two days. I think my great-grandson will see an organised world, with a judicial force backed by military strength that outstrips any other. I don’t think there’s any other solution.”

And a former head of the American CIA , Admiral James Wolsey said, “there will always be a maverick nation.”.

It is UN Shield – the Elimination of War between Sovereign States that David will speak to us about.

The presentation will be followed by a Q & A session.

All participants have the opportunity to introduce themselves briefly after the talk. Like "Hi, I am J-F and organise events, let me know  if you need help with any forthcoming celebration, meeting, incentive, conference and event."

Please share this event on Facebook and Twitter with and invite your friends and colleagues. Ask them to join us on www.the-network.one  (Membership is only £40 a year and this and all events are free except when we pre-order food and drinks...)

I very much look forward to seeing you then.

With all best wishes,

Speaking to the American Congress on 16th March 2022, Ukraine’s President Zelensky was calling for Shield when he said:

The destruction of our country, the destruction of Europe. All American ports should be closed for Russian goods. We — peace is more important than income and we have to defend this principle in the whole world.

We need to create new tools to respond quickly and stop the war. The full-scale Russian invasion of Ukraine, which began on February 24th. And it would be fair if it ended in a day, in 24 hours, that evil would be punished immediately. Today, the world does not have such tools. The war of the past have prompted our predecessors to create institutions that should protect us from war. But they unfortunately don’t work. We see it, you see it.

So we need new ones, new institutions, new alliances, and we offer them. We propose to create an association, U-24, United for Peace, a union of responsible countries that have the strength and consciousness to stop conflicts immediately, provide all the necessary assistance in 24 hours if necessary, even weapons, if necessary.

Can anyone now deny that the concept of Shield is something whose time has come? The saddest words in the English language are, “If only” ….. it is time to act!

"THE FUN AND FUNCTION OF FILM FESTIVALS, PRE- AND POST-PANDEMIC" with Phillip Bergson 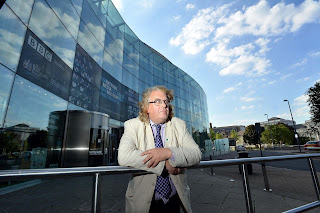 Television for the Environment - Diwali and COP26 Reception at Oriental club on 2 Nov at 6.30pm to 9pm Inbox

Television for the Environment - Diwali and COP26 Reception at Oriental club on 2 Nov at 6.30pm to 9pm

Dear Friends
tve which I chair is holding a Diwali and COP26 Celebration Reception on Tuesday 2 Nov at 6.30pm to 9pm at Oriental Club to:
1 promote our 10th Anniversary GSFA ( Global Sustainability Film Awards ) at BAFTA
2 update everyone on tve's COP26 activities
3 raise funds for the ongoing work of tve.
I attach the flyer for the event. The cost of a ticket is £75 payable to Television for the Environment. 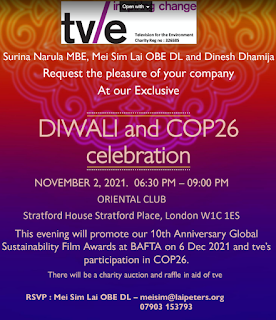 I have an allocation of 30 tickets for this event as my co-hosts have got the remaining allocations for their friends
If you would like to join us for this event please let me know as soon as possible as tickets are selling fast and there
are not many left.
It should be a very glamourous affair as dress code is Indian /cocktail /business wear.
With best wishes
Mei Sim
Mei Sim Lai OBE DL
Chair
tve ( television for the environment )
Charity no 326585
07903 153 793
Posted by JFDE at 08:38 No comments:

JFDE
My experience in international hospitality, event management, public relations, charity and marketing with varied established contacts across these sectors worldwide allows my clients to benefit from professional expertise and be a step ahead of their competition. Individuals or businesses: whatever your needs or budget, I contribute to your success.